Our Favorite State License Plates and Their Meanings

One of the most popular road trip games kids & teens play is the license plate game. The goal of the game is to try and see as many license plates from as many different states as possible before reaching your destination. Most of the time you reach about 20-30 different states before getting tired or reaching your destination, but have you ever wondered why each states plates look different and what they mean?

Each state has a different image and unique design to their plate. With 50 different states and 50 different designs, each states plate proudly stands out from each other. Some states display mountains while others display famous presidents.

When you think of Florida, usually two things come to mind: Disney World and oranges. Florida’s plates proudly display oranges front and center, with a light green outline of the state in the background. Craving an orange yet? This plate features the slogan “Sportsman’s Paradise”, which is one of the states nicknames given to it because if it’s many fishing and hunting locations throughout the state. The plate also features a pelican in the background which is the state’s bird. Montana offers a couple different plates for residents to choose from. The standard plate shows an outline of the state and the words “The Treasure State” which is one of the states nicknames. The second options is the Yellowstone forever plate, which has a bear on the left side of the plate and a forest along the bottom, as they’re well known for breathtaking nature! New Mexico is one plate that is sure to catch your attention when you see it. The plate is bright yellow with red lettering and the state flower, the Yucca, in the corner. Fun fact: The New Mexico plate is also the only plate to put USA after the state name. One of the more easily recognizable plates in the US is the New York plate. It is a very simple plate featuring a yellow background and black lettering. It simply says “Empire State” along the bottom. Simple and stands out. 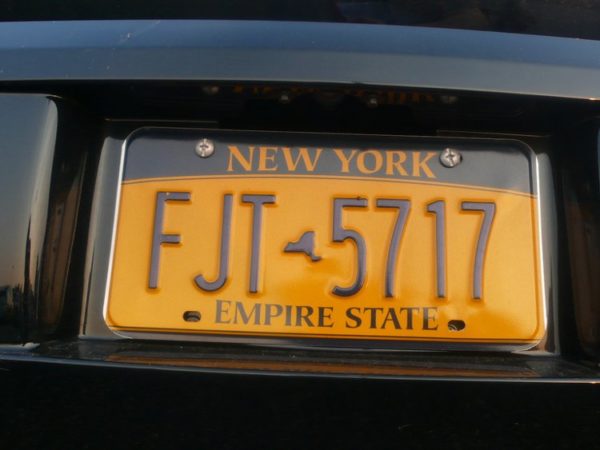 This one has a special place in our hearts, The Illinois plate used to simply feature  Abe Lincoln’s face in the background and the words “Land of Lincoln” along the bottom. A classic. Now the new plate features half of Lincoln’s face, the Willis (or Sears) tower from Chicago and the state capitol building all on one plate…it’s a bit crowded. The plates for Alaska is actually quite similar to New York’s. It’s yellow with dark blue lettering, featuring an image of the state flag in the center and the words “The Last Frontier” along the bottom. Very bold! It’s interesting to see where fellow drivers are from, plus it’s an easy to keep your kids entertained during long car rides! One thing that all states have in common is that all 50 require vehicle titles and registration fees. At Checkexpress, we can help you with both of those services, and more including License plate sticker renewal.

Due to the COVID-19 outbreak, store hours and/or services may change unexpectedly.

Please call first to confirm store hours and availability of services for the day.

Thank you and stay safe.